Attend the tale of European Union, the East 4th Street newcomer, finished with decor by AvroKo since the fall, that seems likely to serve as the scapegoat for the carnival of nighttime inanity that Avenue B has become. An Eater correspondent whispered that things didn't go EU's way yesterday in front of the liquor board, and now the NYSun's David Lombino confirms:

Yesterday, community advocates scored a victory when the State Liquor Authority rejected an application for a liquor license for the highly touted East Village gastropub EU. Owned by the filmmaker Robert Giraldi, EU has been waiting months to open on East 4th Street after shelling out for an expensive build-out and a well-known chef.

Which means that EU's neighborhood PR campaign, exemplified by the sign seen in its window last night (above), doesn't seem to have done the trick. An email in our inbox this morning puts a bing cherry atop the cake: "We are over-saturated with bars and restaurants in this area and had the owners of EU done their homework before dropping $1M+ they would have known that their plans are not appropriate for this neighborhood. But all through this process, their arrogance has been breath-taking -- what goes around, comes around." As we said just last week: ug-ly.

After the jump, another spyphone shot and some additional background from the Sun. 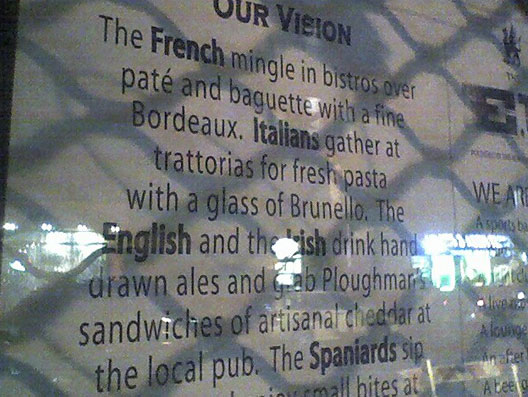 The district manager of Community Board 3, which covers the East Village and the Lower East Side, Susan Stetzer, said she devoted about 20 hours to blocking EU's license.

"Go to Avenue B at night, go to Orchard Street at night. People have not slept through a weekend night there in over a year," Ms. Stetzer said.

Some property owners are fighting back. Last month, one NoHo landlord sued her neighbors and a community leader for $5 million for actions she claims led to the rejection of a liquor license for a proposed bar in her building.

Tonight, area residents will have a chance to vent their frustrations over the density of bars and restaurants, land use, and traffic issues, in front of several elected officials, including the president of Manhattan, several City Council members, assemblymen, state senators, and representatives from the SLA. Several high-ranking officials from the Bloomberg administration also will be present.

UPDATE: A reader reminds us about FloFab's report that the thoroughly problem-ridden European Union has now lost what was, in all likelihood (especially given the recent liquor, er, snafu), its biggest draw: original (and Iron sous) chef Anne Burrell. Gwenael "Rolls Off the Tongue" Le Pape, formerly of Les Halles (oooh, badass) and Django is in, but it's kinda hard to compete with a spiky-haired chick who's been on television. All of which bad luck is leading us to a strange—and thoroughly unfamiliar—sensation. Could this be... sympathy?