Share All sharing options for: Eater Inside: Blue Owl 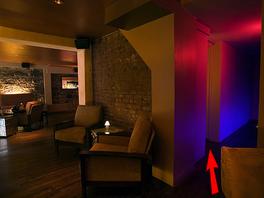 Pictured above, the bar at new speakeasy-themed EVil bar Blue Owl, where barman Charles Hardwick (of both Pravda and Mercer Kitchen) is in charge. Initial impressions of the space have been quite good, with voices as divergent as Flo Fab and URBANDADDY getting in on the buzz action. For Flo, it's probably the promise of Murray's Cheese and Salumeria Biellese charcuterie; and for the Daddy, it's likely the claims of a 'hidden' back room (door to said room revealed at right).

From the official press release: "This subterranean lounge will be for patrons who are in the know, and only those who are told where to look for it will recognize its existence." Right. So just look for the Blue Owl at 196 2nd Avenue, mmmkay?

Further reading at DailyCandy, Flo Fab, URBANDADDY and at the official site.