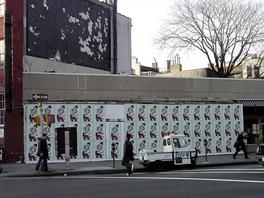 While McNally and Carter prepare to duke it out at the very top of Waverly, just two blocks south another pair of new venues, one of them the former DiCaprio haunt Moomba, are readying themselves for primetime.

First, on the west side of Seventh and W 10th St., an unnamed place (right) has installed -- based on the glimpse we caught a few days ago -- a sizeable bar and plenty of room for seating. Though key names and details have yet to materialize on the place, look for it to fit nicely into the Seventh Ave South 'good for groups' model.

More importantly, on the east side of the street the space that was Moomba (top), then Chateau and, though it never came to fruition, Damon Dash's Breakfast Club, is uncovered, following several months shrouded in plywood. No word on what the space will be, but there are for the first time sizeable windows on the second floor--a promising sign that this will be a serious restaurant entry, versus a pure nightclub.

Whatever these venues are to be, West Villagers: buckle up.

Got the goods? Dish 'em already.