Lots of sad news on the plywood front this week, as the anti-plywood outnumbers the newcomers by quite a margin. On to the reader reports...

1) Tribeca: "It looks like Della Rovere, at West Broadway & Beach St., has closed. They have been dark since around the first of the year. There was a sign posted that they were on vacation and would be returning, but that sign is down, the date has long since passed and the place remains dark and seemingly neglected." A phone call to the listed number for the restaurant says it's been disconnected. Looks like that's that. [NYMag profile]

2) Upper West Side: "It's a bad new year for the Jews, restaurant-wise. Dougies BBQ & Grill on 72nd and Broadway has closed. Dougies was one of the few places you could go for something resembling Kosher BBQ. My observant Jewish pals gnawed every last bit of meat off the ribs when I was there. Burgers, grilled chicken, fries. I thought it was awful, but if you keep Kosher, your choices are limited. I believe 72nd St was the original restaurant, then they started franchising. The one in the Diamond District is still open and is reportedly much better than the upper west side joint. I spoke to someone at the 47th St. restaurant who confirmed that the 72nd St. branch has closed 'for now.'" 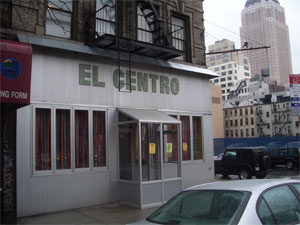 3) Hell's Kitchen: The circle of life on Ninth Avenue documented by area photoblogger WhatISee. El Centro, a new restaurant from neighborhood kingpin John Dempsey, is ready to open its doors while Galaxy Café passes on.

4) Soho: Some happy news from the world of submerged teak. Our sources tell us Lure Fishbar should reopen in about six weeks—so let's say early April.

5) Chelsea: "We have a restaurant coming in on the ground floor of our building — in the mad, mad, mad world of west 27th. Peeking in — looks very interesting... we saw a shipment of several logs go in — and looks like they were used to build booths..." We're stumped. Anyone know what we're looking at here?