We've been dishless the past few weeks, if one doesn't count Morimoto, which means several key openings have come and gone—perhaps you've heard of this Spanish joint Ureña? Yeah, us neither. Actually, we just mentioned it here to prove we could put the cool accent-thing over the ñ. But like all good things, the Eater Dish will not be kept down. So here we go, for the week of January 30, 2006... 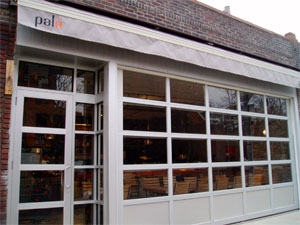 1) A pizza place opens on the Lower East Side. News? Sure, when it's a pizza place in the pizza-by-inch model of Pie or Pinch. Which goes a long way towards explaining why Palá (right) is today's new black, with hat tips today from FloFab and DailyCandy following a soft opening this past weekend that saw the joint jammed on Saturday night. The downside: it fronts the upper end of Allen Street, just steps from Jason Pomeranc's gaping construction pit. Eater's advice: wear boots. [See also: The Hedonista's quick review and the official, albeit minimalist, website.]

2) Another newcomer said to be officially opening today is Novo. Set in the Hudson Square neighborhood (or, as you may know it, the Ear Inn neighborhood), Novo is the work of Alex Garcia, the former Calle Ocho chef who's emerging into public after a year of house arrest after the feds snagged him on drug charges. Sez Strong, "The restaurant, designed by CBA Design, is cool and contemporary with lots of wood and granite accents, and communal tables, and here’s a smart idea—drawers under the banquettes for bags and umbrellas." Expect the sangrias to be flowing, once they get their license issues resolved. (Until then, it's BYO.) [See Also: FloFab, NYMag]

3) Tocqueville is having its first of two opening parties tonight in its new location—about a block from its old location. Only in New York, kids. The new address is 1 East 15th Street (near Union Square). [See More: Citysearch profile N.B. old address]

4) Our new old friend Cookshop is now open for lunch and brunch, per Strong.