On the House: NY Whiskey Fest

Share All sharing options for: On the House: NY Whiskey Fest

On the House is our weekly column written by the owners and operators of the great food and beverage establishments of New York. Your resident proprietor is William Tigertt of Freemans.

One of the best parts of being a restaurateur is the industry tastings. All sorts of purveyors will bring in their top stuff and it’s your job to suss out which is the best. Steak, wine, bacon, whisky, champagne, caviar, beer these are my favorite things and invariably someone will set up an event around them and give me an opportunity to sample all them all for free. This week the main event was the Malt Advocate Magazine’s New York Whiskey Fest at the Marriot Marquis in Times Square.

My first inkling of what was in store was the affidavit you had to sign that you wouldn’t drink and drive and hold the Malt Advocate harmless in the case you did happen cream someone on the way home. I was then ushered by security into the largest collection of middle-aged drunken paunchiness that I’ve ever witnessed. It was whiskey time. 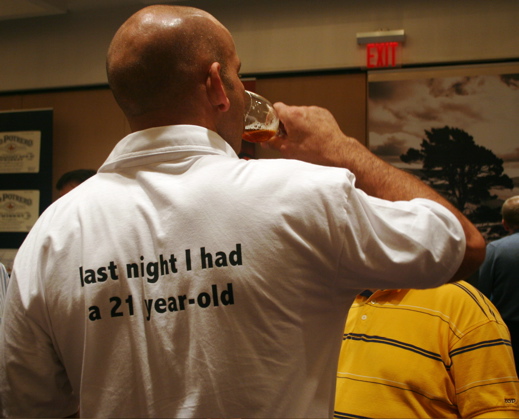 Most of the wine and spirit tastings I attend are open to the industry only, and are rather staid affairs with a lot of sharp elbowed sommeliers in suits jostling their way to the premier cru tables. Whiskey Fest was different. It was paid event open to the public with ninety-dollar tickets (well, it was at least for those who didn’t score free tickets from their liquor reps).

I arrived about half way through the event, and it was going full tilt. The organizer got on the mic and admonished the crowd “Please stop stealing the bottles of whisky off of the tables. The whiskey is free. It’s not worth it. You will be kicked out in front of your friends.” With this advice in mind, I hit the buffet first to carbo-load before working the tasting tables.

The event itself was very well organized and featured over two hundred whiskeys ranging from American rye to fine single malt Scotch. Having to pick your battles in these situations, I focused mostly on the domestic whiskey to drink neat and mix in cocktails. Here are some of my highlights:

Pig’s Nose Scotch – 40% Alcohol
Blend of Speyside, Islay, and Lowland malts “as smooth as a pig’s nose.” How or why these guys are experts on pig noses, I have no idea. To their credit, they were super friendly and their Scotch was indeed very smooth.

Michter’s Straight Bourbon – 41.7% Alcohol
Although, I love all the Michter’s whiskeys this is stellar cocktail bourbon. It makes an especially good Manhattan.

Jefferson’s Reserve - 45.1% Alcohol
The best discovery of the show – aged 12-17 years. Smooth and beautiful and delicate with a long finish.

LeNell’s Red Hook Rye – 68.2% Alcohol
Made in Kentucky, not Brooklyn. This over proof rye is private labeled for the LeNell’s store in Red Hook. It’s 23 years old, and amazing stuff if you can get past the potency.

Bulleit Bourbon – 45% Alcohol
Another great cocktail bourbon, a drier, fiery counter point to the Michter’s. This is the spirit to use for sweeter whiskey drinks like a whiskey smash or Presbyterian Press to give them good balance.

Pappy Van Winkle’s Family Reserve 20 Year-Old - 45.2 Alcohol
The best of the legendary Van Winkle. It has robust body and lingering taste of dried fruit. You can bury me with this one.