Share All sharing options for: Dish: Russian Tea Room, The Beatrice, and More!

And now, without further ado, the conclusion of The Dish for Friday, November 3, 2006. At this time, please take a moment to silence your cell phones. 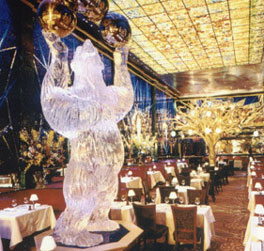 1) Russian Tea Room: After four years of dormancy, an ownership change and a brief stint when it was to be the NY headquarters of the PGA, the Russian Tea Room reopens tonight. Now that Gary Robbins is in the kitchen one can expect the Rusky edge to be softened a bit. But not by much -- caviar as far as the eye can see is promised, as well as a room that has been restored and remodeled to its late 1990s grandeur. 150 West 57th Street, (212) 581-7100. [Eater spycam-age, NYP, Flo Fab]

2) The Beatrice: Small-time plywood player and former neighborhood Ital, The Beatrice Inn reopened, unofficially, this week as lounge. The owners, EO alums among them, are keeping the details sparse, but we had a correspondent inside on a recent pre-open evening: "This place is cool and totally different from any other lounge, bar, resto type place I've been lately. It has a very euro feel but in a non-cheesy way a la Le Baron and Paris, Paris - which makes sense since the owner of those places Andre is involved. There are 3 rooms. The front has fireplaces and old (really new) couches. There's a small VIPish area to the side with another fireplace and seating. Then there's the downstairs bar with vintage mirrors, cool sconces, it has a real chaucer-tabard inn type feel. Then there is a rear room with red leather couches, where a DJ will be spinning and people will actually be dancing! Oh, and you can smoke - no word as to whether this is an unofficial policy or not, but if you're in the mood to dance to The Smiths and smell like a marlboro, then this is the place. Supposedly they'll have a small menu, and a very, I repeat, very rigid door policy." 285 West 12th Street. [EaterWire]

Ahead, vegetarian mainstay Kate's opens in Brooklyn and Babouche, a wild card in Soho.

3) Kate's: An outpost of the popular East Village vegetarian restaurant Kate's has opened in Williamsburg. Test of Will: "Every day I pass this restaurant with no sign on Berry and South 2nd. Turns out, it's Kate's Brooklyn Joint. They don't have a to-go menu, so I took a shot of the menu on the door. I'm not sure if it's new or if they just never got around to buying a sign. I assume it's a spin-off from the East Village place by the same name (minus the Brooklyn)." [Test of Will]

4) Babouche: Hidden entrance alert. Babouche, cousin of Murray Hill's Barbes, has opened in the back of the L'Occitane store. No Eater site inspection has been made, but Thrillist has this to say: "While you're eating/drinking/fabulizing, be sure to admire the restaurant's build-out, as everything from lanterns to tiles comes straight from Morocco. The overall effect's transporting -- a good thing, because even though Soho's no Murray Hill, it's hard to forget you walked in here past a shelf-full of sandalwood-scented guest soaps." 2 Prince St, Soho; (212) 219-8155. [Babouche]

It's clear we can't do this without you, yes? So where's your dish then?