1) Williamsburg: This delightful Will Femia vista comes our way via the Eater Photo Pool, appended with this commentary: "Y'know that big anti-smoking mural on Berry way down on like South 5th near the bridge? There's a little building next door to it with a liquor license application in the window. When I pass it at night lately I've seen them doing work inside." [PLYWOOD] 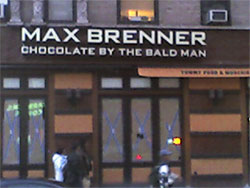 2) East Village: A special Eater correspondent reports from a new hotbed of Brenner, "The bald man is spreading to 2nd Ave and 9th Street." Madame Snack via The Sun has more. [PLYWOOD]

3) East Village: Emails another reader, "Raga, 433 east 6th st closed in early July. They have been renovating ever since, opening late november as a restaurant lounge with new american/french small plates and extensive cocktail menu." [PLYWOOD]

4) Chelsea: "The site of Manhattan's very first Krispy Kreme -- shuttered last year -- is being taken over by a branch of Burgers & Cupcakes. There's a big sign in the window in the space, on 23rd St. just east of 8th Ave. At least the building is keeping up the tradition of serving health food." [PLYWOOD]

Ahead: word of a new Upper Midtown West lunch spot, plus signs of life in the former Caffe Rafaella's and Tocqueville spaces.

7) Midtown West: Midtown Lunch reports, "Sophie’s Cuban Cuisine is opening a new branch on 56th St. between 5th & 6th Ave. No word on the opening date, but Midtown north should be looking forward to what the workers around Lexington and 41st have already discovered: quick, and reasonably priced Cuban dishes like roast pork (pernil), oxtails, steak and onions, pork chops and more- all served with rice, beans and plantains." [Midtown Lunch]

6) West Village: "you mentioned Caffe Rafaella's sudden closing already, but i did notice a Work Permit there this AM: 'Installation of a NEW eating & drinking establishment.' not sure iif it means Rafaella is coming back or someone new." [PLYWOOD]

7) Union Square West: "Theyre's something happening in the old tocqueville space on 15th just off union sq. west. looks like theyve gutted the bar area but the old curtains remain so I couldn't catch much else." [PLYWOOD?]