The Curious Case of Bar Martignetti

Share All sharing options for: The Curious Case of Bar Martignetti

Above, a photo from March 2006, when the Plywood Report made first mention of a new bar/eatery coming to the corner of Broome and Center Streets in Soho. Its name: Bar Martignetti.

Take special note of the inset picture, and the season emblazoned thereon. If you've been tracking this story, you'll know where we're going with this. Martignetti didn't, in fact, open this past summer. Nor did it open last week. And, despite the pathetically hysterical speculation from other media outlets, it won't be opening this week, either. Ahead, the Martignetti timeline, and some background on the why. 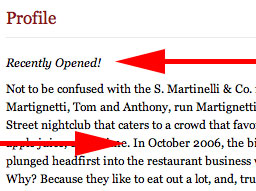 Which brings us to today, with Martignetti/Belgrade still unopened.

Now, delayed openings are hardly a big deal; happens all the time. (As background, the issue here is—wait for it—liquor-license related. They've got the license, but not all the paperwork, as we understand it.)

What's interesting is the light this casts on the feeding frenzy, especially among the city's burgeoning crop of email dailies. While this sort of behavior has long been the norm between NYMag and TONY, this is the Internet, kids: if it ain't open, don't run the item. (Kudos to DailyCandy for staying on the sidelines with this one so far, and 10 lashes, self-applied, for having listed Martigentti under "OPEN" in the Eater Radar for the past few days. Finally, triple bonus points to Thrillist for obvious reasons.)

Meantime, if you've scheduled a holiday party for your company at Martignetti/Belgrade next week—hold your breath. You might just get lucky.
· Plywood Report: Bar Martignetti [~E~]
· Fall 2006: Less Batali, More McNally [~E~]