West Village residents, please pay attention. Your neighborhood scores a massive dose of Plywood this week. Yes, there will be a quiz. 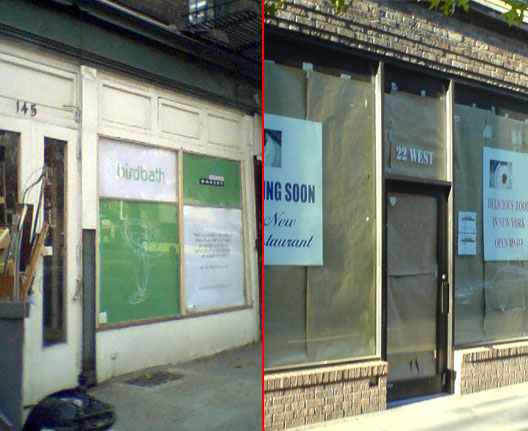 1) West Village: Remember the City Fakery scandale of January 2006, in which a new "green bakery" named Birdbath in the upper reaches of the East Village turned out to owned and operated by City Bakery? Right. So. An operative emails, "Birdbath by City Bakery (their "green" bakery) is setting up shop at the corner of of Charles and 7th Ave in the West Village (above left)." [PLYWOOD]

2) West Village: Eater operatives observe, at 22 West 8th Street, what is clearly an Asian-type venue with noble aspirations (above right). Storefront has been papered for some time now, so we shouldn't be too far off. [PLYWOOD] 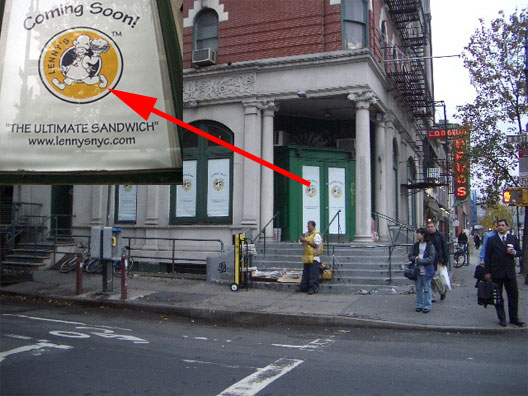 3) West Village: Two tipsters report in on this newcomer. a) "The former Greenwich Brewing Co will not be Au Bon Pain, the Gap, or a bank. Instead a new outpost of the ever expanding Lenny's Sandwiches will fill the space." b) "Hmm, I didn’t think I could like anything less than the food at Greenwich." [PLYWOOD]

4) NoBatt: "The owners of George's Diner on Greenwich and Rector are opening a new pizza joint on Greenwich Street a half-block north, across from the Pussycat Lounge. It replaces a pizza joint that was M-F 10-5 only; George's son Billy Koulmentas assures that the new joint will be open until 10 or 11 pm nightly. George's Diner itself is not quite yet ready to go 24 hr and will continue to keep its own close-at-11p schedule; the neighborhood is a bit weaker since some of the local buildings have gone 1,200/sf condo and are now empty. But life is otherwise on the upswing down in NoBatt." Jolly good. [PLYWOOD?]

Confidential to those tracking the recent Plywood reports on GalleryBar, set to replace 13 Little Devils on Orchard Street in Hell Square: a publicist has sent along additional details. Prepare to be shocked and awed concerning "one of the most highly anticipated openings of the year," after the jump.

A passion for art and a legacy in nightlife are the inspiration for the new lounge, to be located at 120 Orchard Street (between Delancey and Rivington Streets) in New York City. Sure to be one of the most highly anticipated openings of the year, GalleryBar is set to merge the art world with the nocturnal.

Created by Darin Rubell, cousin of legendary late Studio 54 co-owner Steve Rubell, Plan B owner Joshua Boyd, and newcomer Derrek Vernon, GalleryBar is no mere lounge. Reflective of its neighborhood, the booming Lower East Side art district, GalleryBar will also be a gallery by day, featuring established, as well as local and up-and-coming artists and photographers.

And so in Hell Square, life continues apace.