hell square (hÄ?l skwÃ¢r) n. 1. the portion of the Lower East Side extending from Houston Street on the north to Delancey Street on the south, and from Allen Street on the west to The Delancey on the east. 2. especially during evening hours. 3. see also B&T. 4. be very afraid.

For the concept and naming of Hell Square, we're indebted to Dealbreaker editor John Carney, with whom Team Eater sometimes carouses. (UPDATE: Seems Carney passed along the concept of Kearney on this one. If you understand what we're talking about, we probably owe you a drink.)

We have yet to broach the idea of Dantesque rings of Hell Square with Mr. Carney, but if we were to do so, we'd imagine the 10th ring would encircle Fat Baby and radiate out from there. With that in mind, intel on two new establishments in Hell Square:

Ninth Ring: Speaking of Fat Baby, seems its owners crave blood—er, expansion. We're hearing they've snapped up the lease on the vacant commercial space around the corner, just north on the west side of Essex Street. Their devious plan: another bar. 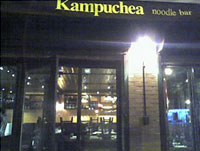 First Ring: On the outskirts of Hell Square, an Eater reader emails, "was walking home last night and noticed that the signing is finally up on the restaurant on the corner of allen and rivington (east side of the street) and it's gonna be a noodle joint - looks just about ready to go. hoping it's a good local joint." Lady Strongbuzz had the scoop earlier this week; it's called Kampuchea Noodle Bar and leans Southern Cambodian. Not sure we'd put it in the same breath with Momofuku, though—the construction looked slapdash, and a local wag observes, "Let's just say it's not going to be a chef-driven establishment."

As always, venture into Hell Square at your own risk.
· Kampuchea Noodle Bar [Strongbuzz]