Plywood reports—sightings of soon-to-open bars and restaurants—are sent in by readers just like you. Get in the game. 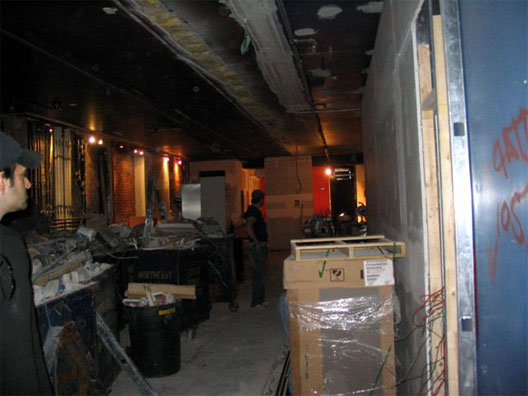 1) Lower East Side: An Eater reader emails, "You have posted that something called GallerBar is opening on Orchard street. I spoke to one of the owners, Darin Rubell (?) and snapped a picture of the work they are doing (above). They said they will be open in december..looks like there is some work to do." N.B. this is the former 13 Little Devils space. [PLYWOOD]

2) Union Square West: "Last week I wrote regarding the old Tocqueville space and the imminent changes.Today while passing by again, I did some further investigating. Direct from Marco (apparently owner at Tocqueville), they are making renovations expected to be completed by December. He tells me it will be a serious sushi place (no fusion) - I'm thinking along the lines of Seki, Yasuda, Jewel Bako." [PLYWOOD]

3) Hell's Kitchen: "Brasserie 52 looks nearly ready to open on 9th Ave and 52nd." Per Zagat, the joint will be a casual French bistro "with a 30-ft. bar, a pastel color scheme, stone-tiled floors and art nouveau posters on the walls." Projected opening: mid-month. [POST-PLYWOOD]

4) Central Village: Once in a great while, flacks can be useful, as this email makes clear: "Crumbs Bakeshop is set to open its new flagship store at 37 East 8th Street between Broadway and University in New York City. This location will be more of a café than the other Crumbs locations (East Side, West Side and 42nd Street). Featuring seating for 45, the location will also have extended hours (opening until about 1:00 am daily), Wi-Fi access and, during evening hours, a tapas dessert menu. The new Crumbs location is set to open early December." [PLYWOOD] 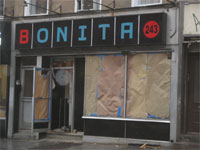 5) Fort Greene: Per Brooklyn Record: "Fort Greene denizens may have noticed the appearance of some colorful signage at 243 Dekalb Avenue this week. After months of navigating the Landmarks process and putting their signature aesthetic stamp on their new space, the men behind the Williamsburg restaurant empire that includes Diner, Marlow & Sons and the first Bonita are just a week away from giving Brownstone Brooklyn a taste of their inexpensive but totally delish Mexican fare. Word is that there will be a few nights of private tastings next week followed by a public opening next Friday." [POST-PLYWOOD]