In an era where procuring a liquor license perhaps has become the supreme test of a bar owner's mettle, we offer a quick lesson in Community Board management.

Above, we have The Marshall Stack, as seen in a Plywood report back in June. Take note of the menu posted in the window: in bold gothic font are presented "a few of the items we plan to have on our menu." Among them: a caprese salad and a "classic cuban" sandwich. Why, who could refuse granting a liquor license (even of just of the paltry wine-and-beer variety) to such a fine establishment? Certainly not Community Board 3, which greenlighted the Stack in July.

Fast forward to this week, and UrbanDaddy's mention of the Stack's English muffin pizzas, a dish missing from the June menu tease but which we happened to sample for ourselves a few nights back when a bartender placed one on our table as a freebie. Without turning this into a review, we'll just point out that the "pizzas" are made in a toaster oven at the end of the bar, which is pretty much the only cooking space at the Stack. All of which is a long way of saying that bar owners looking to speed up the liquor license approval process might want to get a toaster oven of their own, and advertise it accordingly. This is how it's done, folks.

After the jump, the Stack's current menu, for comparison with the June tease. 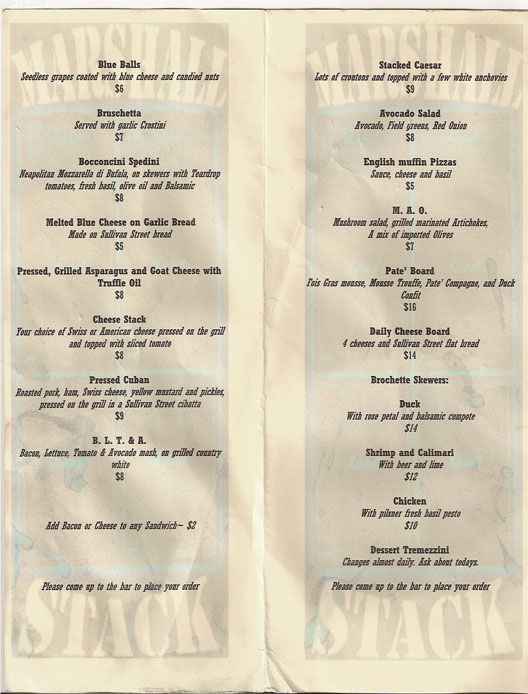