1) Park Slope: An Eater reader emails, "Here is a picture of 560 5th Avenue in Park Slope, Brooklyn. They have been renovating this place for a few weeks, and now you can actually see the hard wood floor and tin ceilings in place. Permits in the window for 'Eating & Drinking Place.' The workers were pretty tight lipped about what was opening, but the neighbor said they heard it was going to be something called Sidecar, which I heard was going to be part of Blue Ribbon's empire." [PLYWOOD] 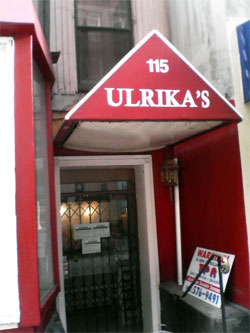 2) Upper East Side: "Remember Ulrika's on East 60th? Former Russian Swedish restaurant that suffered even as it displayed an unused table in its boutique window (the glass of which remained cracked for several months before it finally succumbed to closure (on a street now desolate after the health department's condemning of Pegasus- the gay bar with 4 dollar well drinks). it's a busy street and somebody's taken the bait. there is serious plywood going up, namely a new bar, and a lot of unclear stuff in the back. any news?" [PLYWOOD]

3) Chelsea: "Just heard that the owners of the beloved Tia Pol are opening a new restaurant on 24th St. and 9th Ave. It will be a sliver of space meant to complement the original spot down the street on 10th Ave. Not sure if it will have the same name but I doubt it." [PLYWOOD]

5) Soho: Per Leuzzi: "Sam [Mason] was most recently the pastry chef at WD-50, and is readying his first solo venture. Said venture, to be housed at 525 Broome Street at Thompson, is not yet named, but will be open from 6PM to 3AM. There are 50 seats, plus a cocktail lounge downstairs. Said venture is also running a month or two behind schedule and will open in 2007, January or February at this point." [PLYWOOD]

Spotted Plywood in your neighborhood? Do tell.