You didn't think we used the word 'bifurcate' for our health, did you? On we go to the Non-Manhattan Dish, a land of opportunity for those of certain, choice geographical positioning. And Peter Meehan. 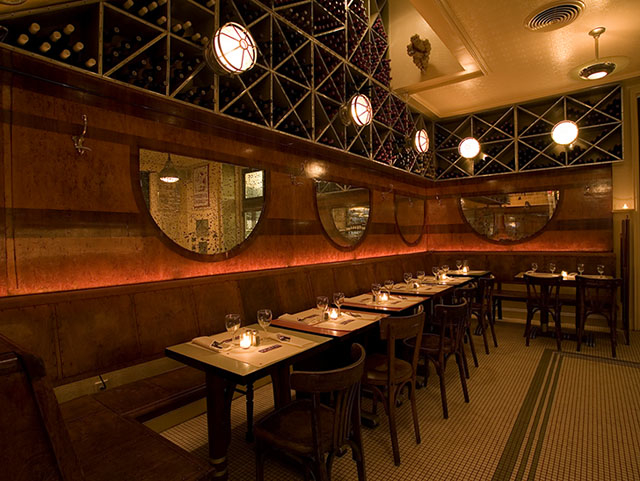 1) Domaine Bar a Vins: Three words: Long Island City. Four more: Note from the proprietor. "We are pleased to announce that Domaine Bar a Vins is now open for business and we invite you and your readers to come check us out! We offer a selection of Old World & New World wines, as well as fifteen cheeses and a daily oyster menu. Co-owners Pascal Escriout ( LIC readers will recognize his name as the owner of neighborhood bistro Tournesol) and Robert Gonçalves, who was the manager at the former Banania Cafe on Smith Street, have really transformed the space from the Mexican diner that it was before, into a true Parisian-style bar complete with metro tiles and antique hardware. We are directly in front of the 7 stop at Vernon Blvd, one stop from Grand Central, so please come by!" 50-04 Vernon Blvd, Long Island City; 718-784-2350: closed Mondays. [EaterWire Inbox]

2) Sheep Station: Next up, we've got a new Australian pub in Park Slope (149 Fourth Avenue, 718-857-4337), outfitted, per New York, "with corrugated tin, salvaged wall paneling, and a fireplace in the back room, where the owners show local art and plan to air rugby and cricket matches." The chef/co-owner is Martine Lafond (former Smith Street Kitchen managing partner) and though she is from Quebec hers is a menu of simple Aussie bar food. Owner Jason Crew is from the place in the Men at Work song. [NYM]

3) Wombat: When you grow up to be a restaurateur, you'll understand that there is no better feeling, save for besting the SLA, than having graduated from Plywood. Especially when such a feat seemed like a far flung fantasy. Good news from East Williamsburg (Grand between Lorimer and Leonard), where Wombat is now open. From the ground, late last week: "I wrote to you a few months ago about a restaurant in its plywood stage called Wombat. Another reader wrote in to say that construction had stalled due to a stop-work order. The order was lifted, improvements have been made, and according to the owner the restaurant will open this weekend and it will be serving Australian-style brunch and dinner everyday. Progress on the east side of the BQE!" [EaterWire Inbox]

4) Juliette: Finally, there is this new bistro on North 5th and Bedford-ish. There are details still to emerge on this one, obvs, however what we do know is that the menu is rather down-the-middle NY bistro and there will be rooftop seating, weather permitting. Not a bad edition for the neighborhood it would seem. Your reports welcomed. [EaterWire Inbox]