The Shutter Special Report: Unofficially Over

Share All sharing options for: The Shutter Special Report: Unofficially Over

A few weeks back, we served up a special Shutter report of closed venues that were about to experience glorious rebirth. Think of this post as that post's dark, angry cousin.

Sometimes a Shutter is just a Shutter: the red is running too strong, and the only choice is to close up shop. Other times, though, death comes not with a bang but a whimper. Here are two that fit that category.

1) Upper West Side: An Eater correspondent emails, "Jean Luc has been closed since early summer and shows no signs of reopening. It's up for sale, but no one has chosen to pick up the lease due to an excessive amount of key money that is required to take the lease over." When last we checked in with owner Ed Kleefield's plans back in August, they were talking a cajun game; now, we're really just feeling game over. 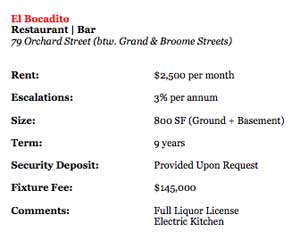 2) Lower East Side: It's been a little while since we checked in with our boy Kamali, the Grim Reaper of the Manhattan restaurant/bar/club scene. Regular readers of his listings email have already recognized his signature style in the listing posted here. That's El Bocadito, the hole-in-the-wall Orchard Street Mexican that was lovingly reviewed when it opened less than a year ago. But then an electrical fire in July forced a temporary Shutter; as with the above, looks like the lights won't be coming back on.

And so the circle of New York restaurant life turns.

BONUS SHUTTERAGE: While we've got you here, an East Village Shutter just across the wire: "San Marcos on St. Mark's is out of bizness. Guy that owns st marks market is opening a korean bar and restaurant."