2) East Williamsburg: Two enthusiastic reader reports about Wombat, last Plywood'ed back in August. a) "I wrote to you a few months ago about a restaurant in its plywood stage called Wombat. Another reader wrote in to say that construction had stalled due to a stop-work order. The order was lifted, improvements have been made, and according to the owner the restaurant will open this weekend and it will be serving Australian-style brunch and dinner everyday. Progress on the east side of the BQE!" b) "I believe at least Charlie from Patois on Smith St, perhaps a few other guys are involved with Wombat. I don't know anything about stop-work orders, but he was looking forward to having it open sometime in the past week- unofficially, before telling the press about it soon after. I hope it happens, because Charlie makes some yummy food, damnit." [POST-PLYWOOD/SOFT OPEN] 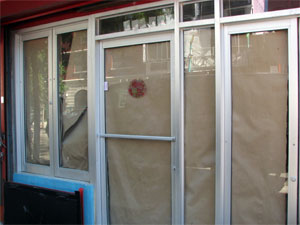 3) Lower East Side:"looks like a new espresso/coffee bar/organic tea salon (they've got all the bases covered) called LuLu's is busy preparing to open directly across the street from blue. 106 Norfolk St." Photo at left. [PLYWOOD]

4) Lower East Side: I was down orchard street and saw what was once formally 13 little devils (rivington and delancy). I was talking to someone in front and the said they were opening a full on gallery and a bar." [PLYWOOD?]