Your attention, please. It's a news-packed Plywood Report this afternoon, so please give it the focus it deserves. 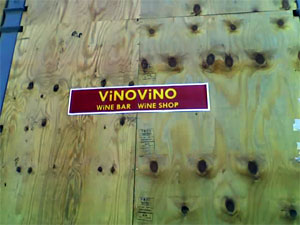 1) North Tribeca: HoodWatch Plywood Alert! "Don't know if you know more than I do about this new wine bar called Vino Vino going in next to Centrico on W Broadway. Isn't this the neighborhood where there was a liquor license freakout regarding a nearby mosque or am I confusing it with somewhere else. [Yes.—ed.] Anyway, cheesy camera photo is attached (right)." [PLYWOOD]

2) MePa/West Village: "majorly premature tip. the spot next to 5 ninth is finally being turned into a resto/bar, tentatively titled The Inn and scheduled to open in 4 months. Other Inn news: the former Beatrice Inn -- subterranean space next to smorgas -- is being turned into a lounge/resto a la employees only. I hear some EO people are involved, as is DJ Paul Sevigny." [PRE-PLYWOOD 2X]

3) Little Italy: "I live near what used to be Odea, a bar that was hot for a while a couple years back (it's on Broome between Centre Market and Mulberry, just above Little Italy). You could tell they were struggling for the last 6 months or so, and they closed down last month. Pretty much immediately after closing down Odea, they gutted what was a really gorgeous interior (I think designed by David Rockwell) and are now building the space out for a new spot. It looks like a small airplane hangar, with a curved ceiling. It's really too early to tell though." [PLYWOOD]

4) Midtown West: Midtown Lunch emails, "Kyotofu. It’s still not open yet (despite be recommended by both TONY & NYMag in the past month), but I snapped some shots of the inside through a whole in the paper covering the window." [Midtown Lunch]