Twenty-oh-six! A new year. It's all happening. As we slowly get the good ship Eater up to full speed, we begin with four stories that you (we) missed over the last few days, all of which are sure to be resto buzz bedrock in '06. 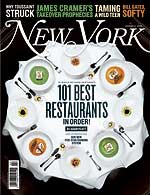 · NY Mag drops the Platt 101, which at first blush seems like a fairly sensible if not aggressively mainstream analysis: Le Bern gets the 1-slot and Momofuku the 101 position, and every restaurant that you'd expect is listed somewhere in between. There is not even a trendy snubbing of Luger here. Don't look for Michelin caliber fallout, but count on some color commentary to follow.

· Gothamist broke the news that Teany was closing, which set off the requisite shock wave. But then, Mr. Nolita himself, Moby, clarifies: "contrary to some of the rumors that are floating around, teany isn't being shut down. we are going to close for a few weeks to revamp and re-model, but we're not shutting down." We're going to tag this one 'developing'.

· New Years Eve at wd-50. For some, a dream come true. Here's what it looked like. No one with any sense has ever really doubted WD, but lately it does seem like there is a renewed interest in what goes on down there at 50 Clinton St. Also, kudos to the mad genius for securing the #4 slot on Platt's list.

· Keil reports that Smoked has closed. Some might say this the start of a BBQ joint fallout, siting the closure of Texas Smokehouse BBQ and Maroons Smoke Shack as evidence. We shall see.