Before you slip off into your weekend, have some Plywood. This week's buzz feed paints a nice picture of the NYC restaurant ebb and flow, spanning the curve from pre-plywood to soft open to closed. Hell's Kitchen & LES residents: you're each down one; Tribeca, Financial and CentVil: sittin' pretty per usual. 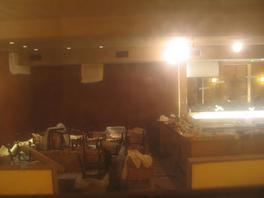 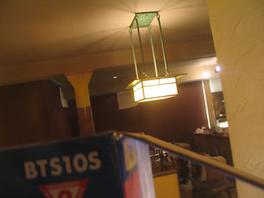 1) Central Village/University: The details continue to stream in on Jack's Bistro Bar. A correspondent writes: "I snuck some pictures of Jack's Bistro Bar, which will open soon at University and 11th, in the old Lemongrass space. Both shots are pretty rough, but you can get a pretty good idea of what it will be like in a month when it's done." Our man adds on his blog: "I’m seeing red walls, faux tarnished copper-looking light fixtures, and bistro chairs. Will this finally be a good place to eat on University Place?" [Status: POST-PLYWOOD]

2) Tribeca: You'll be hearing about this one in the coming weeks: "Arqua restaurant in Tribeca, which seems to be a longtime neighborhood favorite for upscale-ish Italian, just opened Petrarca Vino e Cucina across the street (White & Church, across from the Tribeca Grand). They took over the Baby Doll Lounge space and have been renovating it forever. Tonight is the first night I’ve seen people inside, so I imagine it’s their opening party. The new one is supposed to be a wine bar/more casual Italian place, according to Arqua-man. FYI, a brief Google reveals a Times Dining note that Arqua is named for an Italian village, Arqua Petrarca, so I guess we know where the new name came from, too." [SOFT OPEN]

3) Hell's Kitchen: On a more somber note: "McHale's, gone. I had drinks with a friend last night who went for what she hoped would not be the last time to the blessedly tatty McHale's with the utterly intact 50's dive interior, tuff chick waitstaff and a bacon cheese burger with a huge mound of bacon on top of a gigundo burger. Was it the best burger? Nope but it was a bastion of old (aka seedy) delicious Times Square at 48th and 8th. First the HoJo's and now this. What next?" [CLOSED]

4) LES: And the carnage continues: "Does anyone know the status of Dopey Benny's (on Houston next to LoSide and Landmark Sunshine)? Is it closed for good? The number is disconnected, but it would be a shame to see it go." [CLOSED]

5) Lower Manhattan/Financial: Finally, word of a nice new development for Way Downtown residents: "There is a restaurant that is opening soon on Cedar Street. It is called Koyzina Grill & Bar. I passed by it the other day and it looks like its ready, and has signs posted on the window saying "coming soon" its quite exciting since i just moved into the new apartment building on 2 Gold Street. I think our area needs a place like that and just cant wait till it opens up! I believe it is the same ownership as Koyzina Kafe that is on the corner of William Street, and I have eaten at Liberatos Pizza that's on Cedar Street and I tend to see the same manager in both places, and if that's the case Koyzina Grill is sure to do good, because both places are always packed and the food is always great. Well just thought id give you the 411..." [POST-PLYWOOD]

Glimpsed plywood in your neighborhood? Speak up.