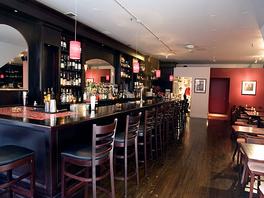 Some neighborhood tidbits. Mostly courtesy of you, our tireless and eloquent eaters. Keep ‘em coming.

1) Venue TBD, East Village: “The oldie Kiev in the East Village just closed. Their phone is disconnected, but when I called them recently (prior to the disconnect of course) they said a new place would be opening there come October/November after renovation.”

2) Shorty’s on the Half Shell, West Village: “When I showed up, I asked to take a photo, and the manager said no. I asked why and he said "we just don't let pictures be taken" And I was like, "well is there a PR person I can talk to?" And he is like "Yeah right, if we had PR there would probably be people eating here" And I said, "well, if you let me take a photo, people will probably see it, and then want to eat here" And he was like, "damn! You're a hustler! Take your pictures" So here it is, not even sure I like it that much, and not even sure they deserve it, but feel free to use it if you like.” (pictured left)

3) The Soda Shoppe, Tribeca: “We will finally be able to get the Bespeckled Trout's amazing milkshakes in Tribeca. The Soda Shoppe, located on Chambers between Church & W. Broadway, is on the brink of opening its doors. A phone call to the number on the awning (521-1100) yields a hopeful opening *this* Thursday, Sep 22nd!”

4) Hideaway, Tribeca: “The owners of the Hideaway believe that the space has a speakeasy past: Old liquor bottles were discovered buried beneath the basement floorboards. But there’s no need to hide the hooch any longer. Chef Alex Oefeli (Jasper, Raoul’s) has designed a menu that’s a step up from pub grub.” (from TONY; pictured right)

4) Mai, Boerum Hill: “New Malaysian place by one of the owners of Cafe Asean. Nice space, nice garden. Opened this past Friday night serving lunch and dinner 7 days a week. I had lunch there yesterday and it was much better than I had expected, though I was the only patron. Mai, Atlantic b/w Nevins/Third Aves. Boerum Hill.”