1) Upper West Side: An Eater reader emails, "What's the story on this Mexican restaurant, which has yet to open? (I took a picture [reproduced here—ed].) I am pleased that there will be another option for burritos on the UWS, a neighborhood of VERY few Mexican joints. Here's what I mean." Mex&Co has been flying below our radar. Anyone know more?

2) Central Village: Another new diamond in the rough. Cathy from Cityrag emails, "A hole in the wall called The Plumpling House opened on West 3rd Street, across the street from the Blue Note and behind NYU's law school. It's a dumpling place, but decidedly un-Asian. The dumplings look strange but are very good. I stopped in last weekend while wandering the area."

3) Downtown: "I saw a sign today that said 'Coming Fall 2005' for another Soup Nazi location way way downtown on Trinity Place/Church Street in between the World Trade Center site and Trinity Church." 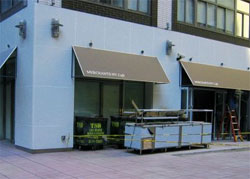 4) Downtown: Blogger A Test of Will reports, "Merchants put awnings on its space in 90 Washington Street recently (right). No word yet on when they're opening, but progress looks pretty rapid."

Because the Good Eater Lord taketh as well as giveth, two reports of anti-plywood—closings, friends, closings—after the jump, including a shattering reader report of the shuttering of Upper East Side BBQ stalwart Pearson's. Meantime, got plywood in your hood? Let us know.

1) Upper East Side: "last night i was making a rare foray to the UES so i thought i'd use the opportunity to grab some BBQ at Pearson's ... except the damn place was shuttered (and me and my friend were shattered.) a guy from the restaurant next door, who was having a smoke break, said that it had closed down. i last ate there just six weeks ago and i hadn't seen or heard anything about it closing in print or online, so i was pretty shocked. it's bad enough that robert pearson retired and the jackson heights branch shut down but what's the deal with this one?! i'd love to know what happened. any clues?"

2) Lower East Side: "Las Tres Aztecas has closed or is closing imminently, to re-open further down on Allen (South of Delancey) -- their landlord wanted to increase the rent to $10,000. Too bad about the mural -- I guess it will just be painted over..."