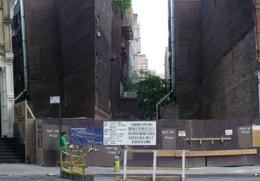 You know the drill: If there's something restaurant-like opening in your neighborhood, drop us an email. If you're feeling bold, snap a cameraphone picture and send it along, too. We'll gather the reports here. Then, if you know more about what's going on or going in, let us know that, too.

Today, we focus on a three-block strip of West Broadway between Franklin and Walker, where there is quite a bit of activity. Centrico has just opened; Cercle Rouge is down to finishing touches; and there's a bit of plywood...

1) In the space that was Liquor Store Bar (above left) we find activity. From our inbox, "corner of west broadway & white in the tribeca east historic district... it's been under construction awhile. poked my head in a couple of weeks ago to ask if there was a restaurant going in. a couple workers replied it was going to be a bar."

2) It is fitting that with Liquor Store Bar closed, its overflow beneficiary right across the street, No Moore is now shuttered too. When we strained to see through the windows, we saw movement. The bar itself was gone, however various plumbing and electrical infrastructure remained. Could be we're loosing this one to retail, but who knows?

3) This may be more a job for our brother, but there is now considerable plywoodage in the space that was the once-adored El Teddy's (above right). Do note that El Teddy's signature fire hydrant seems to remain intact. When the condo goes up, perhaps there will be a food and drink venue at street level? Anyone got the goods?