Mark Will Be Your Sushi Chef Tonight

Share All sharing options for: Mark Will Be Your Sushi Chef Tonight

Is EATER beneath chuckling at egregious typos in a sushi menu? No, sir, we are not. 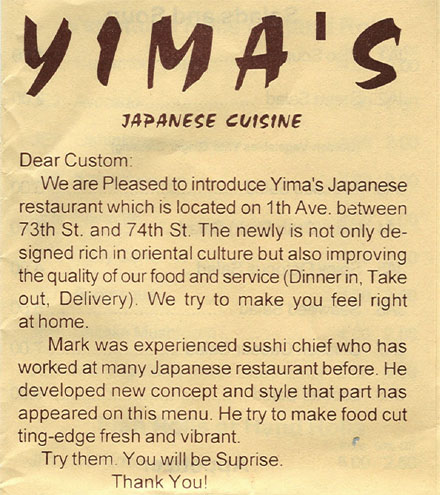 Notes This Is What We Do Now, "The second paragraph takes a decidedly drastic left turn by introducing a heretofore previously unknown individual, 'Mark,' who the audience is apparently supposed to recognize as some sort of worldly chef despite lacking a surname. My absolute favorite aspect of the menu, however, is the last sentence, in which the word 'Suprise' carries the dubious distinction of containing not one but three grammatical errors - it's spelled wrong, the tense is incorrect and it's certainly not a proper noun."
· Greatest introductory statement a sushi menu has ever seen [TIWWDN]