Towards 11PM, the place was starting to fill up with some after-show theatre-goers. But, there were also a large amount of people who came to pay their final respects, like the 8 people next to me who met each other 20 years ago at HoJo's, and who met regularly either after a show or before taking in a late-night movie. Or the couple who met in adjoining booths at HoJo's years ago and are now man and wife. For many of us, it was hard to believe that no one had, or was going to be able to stop this death of a landmark. I myself couldn't believe it was ending, until I looked up and noticed the two missing giant chandaliers that had been there since 1959, and were just there the previous evening. The chandaliers were removed earlier in the day while the restaurant was open, simply by moving the customers away from the booths underneath those chandaliers. Then I noticed the missing lamps above the ice cream counter. It was then that I realized there was no turning back, no chance whatsoever to save this HoJo's. 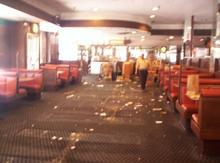 No word on what the new owner is planning for the space. But based on the massive furniture auction EATER passed by this afternoon, this ain't no "pardon our appearance during renovation" scenario.
· HoJo's to Go? Say It Ain't So [NY Times]
· HoJo's Last Night in Times Square [HoJo Land]
· Times Sq. Woe as HoJo's Shuts [NY Daily News]