Share All sharing options for: The Year In Eater, 2005

To close out 2005, Eater invited our favorite digital food correspondents to join us in assessing the year's best eats, biggest surprises, and favorite neighborhoods for dining out. With special thanks to all who participated, away we go...

1) YOUR TOP THREE NYC RESTAURANT NEWCOMERS OF THE YEAR? 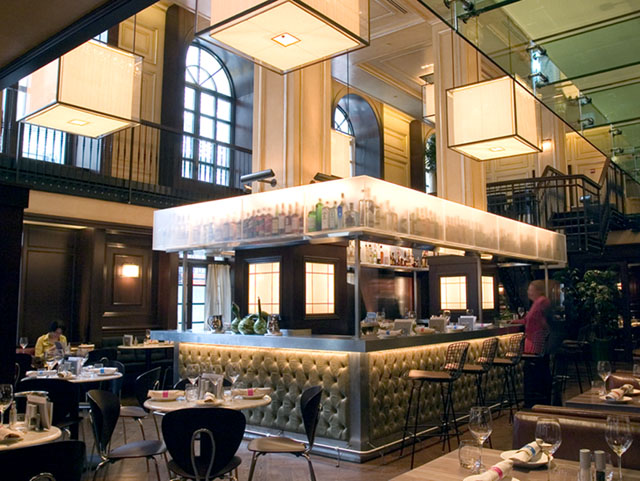 Nosher & HungryMan, NYCNosh: Falai. Our review is coming very soon to this space, but in advance of that, we can say that this dinner was one of this year’s real highlights. Not to mention the fact that we got to eat at the coveted display window table.

Charlie Suisman, Manhattan User's Guide: This one's easy for me: number one is Gilt and the return of Paul Liebrandt. We're in a conservative era in the food world: technique is off the charts but fired-up imaginations are at a premium. You could eat extraordinarily well in New York this past year; I doubt there has ever been a better group of chefs cooking at one time in the city. Yet there isn't a sense of discovery right now, of chefs challenging themselves to shake off the familiar. The first time you tasted Jean George's cooking, for example, it was revelatory. When was the last time you left a restaurant with the sense that the chef is really on to something or has something new up his or her sleeve? Liebrandt brings that sense of adventure back to dining. I also am very happy Little Giant opened (though it may be a bit over year old), and Cookshop, because I'm glad the Five Points folks have a big hit on their hands—they deserve it.

Jennifer Leuzzi, Snack: Telepan, sleeper-award to 202 and a big-room-tie between Del Posto and Gilt.

Miss Ginsu, The Hedonista: The Modern, The Queen's Hideaway, Cookshop.

BL: Gusto and, for raising the bar on design significantly, Gilt and Country. (Rosati has been sidebarring with me about how Gilt and Country are two of the best historic restorations she's seen in quite a while; she's 100% right.) Honorary mention to Falai, which, despite its shortcomings, has left me sated on several occasions; and to Ninja, which we all owe a debt of gratitude for providing such a crystal clear example of what doesn't work.

LS: Intense feelings of inadequacy overwhelm me now that I realize I haven't yet made it to Gusto. And put me on the list that finds Falai overpriced and underportioned. Which leaves? Fatty Crab, certainly. Little Giant. La Esquina. Honorary mention to Aspen for raising the bar on general trippiness in restaurant decor.

2) YOUR TOP THREE RESTAURANT STANDBYS OF THE YEAR?

Nosher & HungryMan, NYCNosh: (1) Market Café. When we have guests who want to eat well, but not too far from our Hell’s Kitchen digs, we almost always end up at Market Café. The food is consistently excellent and the prices are even better. Plus, their wine list offers the best bargain bottles in the city, bar none. (2) Gennaro. The one place in town where we could leave the menus unopened on the table and still order well, Gennaro is a charmer. And if you don’t like what’s on offer one night, return the next to an all-new array of specials. (3) Shopsin’s. Speaking of variety, you won’t find a bigger selection of creative and well-prepared dishes anywhere in the world than at Shopsin’s. It’s entertaining just to read the menu– a thousand-item encyclopedia of Kenny Shopsin’s culinary adventures– but if you really want the full experience, flip off your cell phone, grab a table, and chat with one of the many Shopsins who run the place.

Andrea Strong, The StrongBuzz: Do these have to be new? If not, Tia Pol, Spotted Pig, Five Points.

BL: McNally is king here: The Balth, Pastis, and, though more for drinks than real food, Pravda. Also, screw the rules, Nobu Next Door and Peasant. Also love Nosh's Market Cafe call, though I don't get there often.

LS: I'll roll with BL and add Schiller's, which remains an oasis every weekday before 6pm and still isn't nearly as crowded for weekend brunch as its McNally brethren. Little Frankie's. And, though I no longer work in midtown, the Café Spice takeout stand in Grand Central's food court. 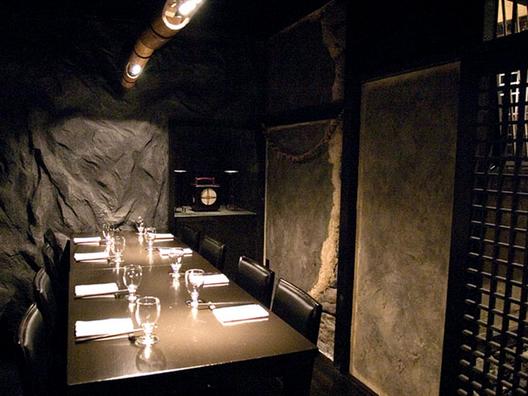 Nosher & HungryMan, NYCNosh: WD-50. For the tender pork belly alone, this meal ranks in our Top 5. But the real strengths of Wylie Dufresne’s flagship restaurant lie in his twin abilities to reimagine classic dishes in altogether new forms and to kick their flavors swiftly up the backside and into the 21st Century. Foie gras served as a beet juice-filled ‘bullet’ delivered the shot across the bow that forced us to pay attention, and the onslaught of genuine innovation did not end until we had polished off our butternut ice cream and pumpkin seed cake. This won’t be a Michélin one-star for long.

Pavia Rosati, DailyCandy: (I'm trying to answer this and I keep getting interrupted by thoughts of the pork confit that I had at A.O.C. in October. Sorry.)

BL: Alain Ducasse. And honorary mention to Ninja, because is was truly the biggest train wreck I've ever seen. Really, there is enough dry ice here to sustain Omaha Steaks for a year.

LS: Per Se, on a rainy, cold Saturday night in late October, thanks to a resy that fell into Ken's lap three days before. (Yeah yeah. Hey, at least I didn't photoblog each tasting menu course.) 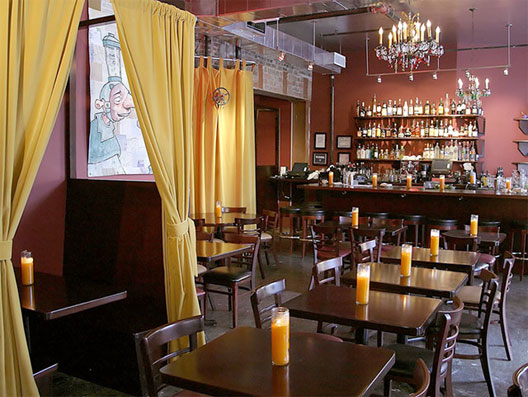 Charlie Suisman, Manhattan User's Guide: Kitchen and Cocktails' quick demise. Charlie Trotter taking a pass on the Time Warner mall. That Michelin got so much wrong.

Andrea Strong, The StrongBuzz: Beppe—it is so GREAT and I had never been.

Jennifer Leuzzi, Snack: The Seasoning of a Chef and Bistro du Vent.

Josh Friedland, The Food Section: The flop that was the Michelin Guide to New York City. Rumors in early 2005 turned into (requisite) PR hype until the eagerly awaited restaurant guide hit bookshelves this fall, whereupon it was largely panned by the food media. Gourmet magazine editor-in-chief Ruth Reichl summed it up on eGullet: "No stars for Union Square Cafe? Come on!"

Nosher & HungryMan, NYCNosh: Rosewater. We knew Brooklyn had great restaurants, but we never suspected that one of our very best meals of the year would happen on a nondescript stretch of Union Street in Park Slope, al fresco on a wooden patio. But we’re so very glad it did. Ethan Kostbar’s $48 tasting menu was an absolute steal– one that gave us the chance to see serious talent in action.

BL: Suisman got this one right. I'd also add our collective willingness to wait on the line at Shake Shack. (Does our gal Strong going another year without an editor count?)

LS: Sunday brunch at Little Giant. Unbelievably good, and the place is always half-full. Don't tell anyone. (No, seriously. Don't.) Oh, and that a surprising number of people whose taste I respect actually professed to like Thor.

5) IF YOU COULD ONLY HAVE EATEN IN ONE NYC NEIGHBORHOOD IN 2005, WHICH ONE WOULD IT HAVE BEEN? ANY GUESSES WHICH ONE IT WILL BE FOR 2006? 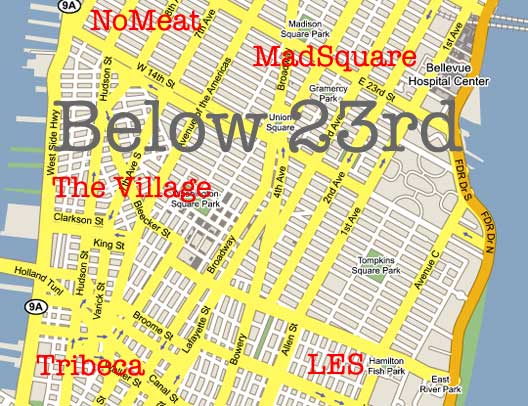 Jennifer Leuzzi, Snack: Does below 23rd Street count as a neighborhood? For 2006, same answer. But, with another 1000 or so seats under-construction now in the Meatpacking District, I’d guess diners will continue to head west en masse.

Pavia Rosati, DailyCandy: Between Gusto, the Pig, and Village, I'd settle for Greenwich Village and be pretty damn happy. For 2006, I suspect more of the usual.

Andrea Strong, The StrongBuzz: Tenth Avenue (chelsea in the 20s). 2006, probably around the same area, further west to 10th Avenue. Or, you know, now that i think about it, the new dining neighborhood is probably going to be Madison/Park Avenue South in the North Twenties, with Country, A Voce, Rio's, and Urena opening there.

Nosher & HungryMan, NYCNosh: Easy. The Lower East Side. As much as we want to plump for our own beloved H.K., in our heart of hearts, we know that the LES has our home turf beat. For now, at least. With all three Wylie Dufresne restaurants (including Alias, another of our favorites), Il Laboratorio del Gelato, Gus’s Pickles, Falai (and its new satellite bakery), Yonah Schimmel Knishes, and Sugar Sweet Sunshine Bakery (to name only a few), the Lower East Side is our own personal Temptation Central. If we moved to Orchard Street, we’d weigh 400 lbs. more. Apiece.

BL: Put me in Tribeca and I'm a happy man. But for New Black junkies, I think the call has to be either NoMeat (Cookshop, Tia Pol (though an '04 entry), D'or Ahn, 202, Bette, Diner, Pizza Bar, and Del Posto) or Steele's stomping ground, the LES, where more new places opened than I can mention (or even know about). I think there's no question that NoMeat will be equally explosive in '06. I'm also watching Madison in the high 20s, where Country and (Carmelini's) A Voce will reign.

LS: LES now, LES forever. Or at least until I move. And except on Friday and Saturday nights, which turned fully radioactive this fall. Shit. The LES really is over, isn't it?

Thanks to everyone who read, wrote, tipped, linked, and otherwise brought good karma our way during Eater's debut year. Join us when Eater returns next Tuesday, January 3, and begins to answer the immortal question, "Whatever happened to the Eater 38, anyway?" Until then, happy new year. —BL, LS & NK