Pull up a digital camera, transit strike be dammed, and welcome this week's foray into the world of as-yet unopened (or about to close) NYC restaurants. Glimpsed plywood in your neighborhood? Let us know about it. 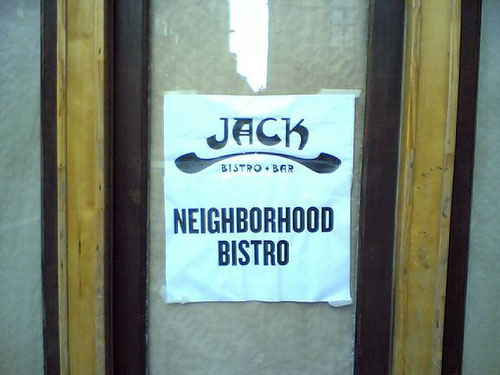 1) West Village: A special Eater correspondent sends along two plywood sightings. Report #1: "There's something opening on the NW corner of E 11th @ University called Jack Neighborhood Bistro, photo here (and above) . There was action in there the other day and some disgruntled guy complaining about how he's lived in the 'hood twenty years and blah blah...not sure what it was all about. No idea when it will open, space inside was still pretty raw when I peeked but had some neat columns."

2) West Village: Report #2 from special correspondent #1: "Also this AM on the way to the gym I spotted Bugambilia Lounge in the old Taqueria de Mexico spot on Greenwich. Photo here. Check out that horrid font (and the name?! A mangling of what I can only guess is some play on bougainvillea?) on the awning. Didn't stop to get a close up as it was raining. Looks cheesy. Also note the Taqueria sign is still up."

3) West Village: Another web personality of note, David Hauslaib, drops a line to note a scoop on his blog: "Pink Elephant is closing down on Christmas Eve, only to pop up in a new, super secret spot in February. Over at Jossip, we've got the promo artwork." (Scroll down past Britney for the goods.) Citysearch calls the club "an indulgent party spot that goes beyond bottle service." Mmmhmm.

4) Gramercy: An Eater reader reports in with bittersweet news: "After 40 years on Irving Place, Sal Anthony's is closing in January. Their lease has not been renewed." A classic indeed; kleenex, svp.

5) Central Village: Forty years old, one year young; the plywood reaper takes them all. Says a correspondent, "Table50 is closing as of Jan 1—but its upstairs restaurant, Cornershop, will remain open under the same ownership."