[In which Eater reports from the front lines of unopened restaurants...] 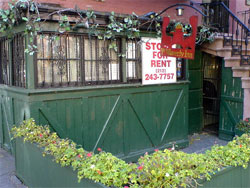 1) West Village: Plywood so fresh, they haven't even cut down the trees yet. Braden Keil's got the scoop on what's to become of the recently shuttered Ye Waverly Inn on Bank Street: a new restaurant by restaurateurs Eric Goode and Sean MacPherson, with La Bottega chef John DeLucie at the grill. Investing in the restaurant? Condé bigshot Graydon Carter, who lives a few doors down. If that's not enough wattage for you, how about the fact that Keith McNally is planning a new Italian restaurant around the corner to open in Fall '06? Firepower, people. Firepower.

2) Chelsea: Another follow-up to a shuttered spot: hyperlocal Chesea blog SidewayZen reports that the shuttered Chelsea Commons space at the corner of Tenth Avenue and 24th Street plans to reopen this spring as Trestle on Tenth. In an earlier post, SidewayZen explained: "Trestle on Tenth will be a casual, hospitable place with an emphasis on American dishes with a European flair. Swiss-trained chef-owner Ralf Kuettel has worked in New York at Union Square Cafe, Cena, and Zoe." (Referent: previous plywood spotting at this corner.)
3) East Village: A Villager article about rowdy nightlife on Avenue B says the nabe is in line for a new Brazilian steakhouse from the team behind Avenue B Moroccan Le Souk. Queries an Eater reader, "Maybe someone can confirm the rumor that they also bought what used to be B3 and The General Store—two restaurants one block south on the same side of Avenue B as Le Souk. B3 seems to open sporadically and General Store has been shuttered for awhile except for the occasional brunch over the summer."
4) East Village: To close, an anti-plywood report. Per Chowhound and several reader emails, the East Village outpost of the Miracle Grill is finito. (The Bleecker Street branch in the West Village presumably remains operational.) Its back garden will be missed.