Today we bring you part II of the Eater Gift Guide. Our focus here is on gifts from NY food institutions, any of which, for the eater set, is as close to a stack of $20s in an envelope as it gets.

6) Shake Shack: For that Shack-obsessed someone in your life, who will plunge into depression after tonight, give him something to help get through the winter: a SHAKE SHACK gift card. Who needs a frapuccino on debit when you can get CONCRETES? Fries, dogs and double shack burgers too. Plus, the card is lovely looking, quite the snazzy wallet accessory. Flash it ever so subtly to let people know that you take your fast food rather seriously. Buy.

7) Blue Ribbon Bakery:It's impossible to eat at a Blue Ribbon franchise and not want the Owners Bromberg (brothers Bruce and Eric) to adopt you--not for the love, but for the bone-marrow-on-demand. Around the corner from their West Village "Bakery", they recently opened a market where they're selling some new treats to go with their fresh-baked loaves, such as Mexican honeys from chefs' farms in Vera Cruz & Puebla. Bruce's pick is the Mesquite Blossom, which he describes as "earthy, coarse, with a hint of caramel and slightly floral." It's very thick--so thick in fact, "you can eat it with a fork," which isn't a bad idea. At the 'mart, they like to serve it on warm toast with some manchego cheese. In that spirit, we introduce "The Manchego & Mexican Honey Sampler," featuring some loaves, some cheese and the honey, all tied up in a basket. The perfect holiday picnic hamper for special eaters in your life. The brothers’ E-commerce business isn't set up yet, so you'll have to call (212) 337-0404 or visit the shop in person.

8) E.A.T.: Before Eli Z. waxed egotistical and named a gastrodome after himself, he opened E.A.T., and he sold the densest, darkest chocolate cake (single layer) and the creamiest cheesecake in the city. And you tasted them. And you saw that they were good. And then you had to rest. Here's something the calorie-counters up north won't tell you: ask for a container of creme fraiche on the side; it pairs so well with the chocolate cake that you'll never be able to go without it again. (It's the details that'll make 'em think you're thoughtful.) Perfect for numbing the pain of visiting your friends and family on the Upper East Side. Call E.A.T. at 212 772 0022 for delivery, or stop in. 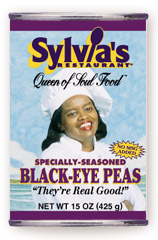 9) Sylvia's: In general, cans aren't considered very deluxe. Usually, the word is followed by its partner "drive," in which case we think "homeless," "hungry," "old food," etc. The exception are Sylvia's. Black eyed peas? Collards? This is legendary BBQ in anywhere you want it. (Ok, legendary BBQ sides; they don’t ship their smokers.) The NYC institution also offers a bunch of sauces (Kicking Hot Hot Sauce, Soulful House Dressing, etc.) and mixes for things like Fried Chix and Cornbread. Just thinking about a package of Southern comfort is making us think about introducing a special Eater drive of our own. For those ‘cue junkies in your life. Buy.

10) Balthazar Bakery:As far as these things go, it doesn't get much better than a breakfast basket from The Balth, especially to get the lushes like us through holiday hangovers. A sampling of greatest patisserie hits will do--croissant--regular, almond or au chocolat; cannele; pain au raisin and chausson aux pommes. Or else, skip the Frenchie theme and go for the tragically overlooked STICKY BUNS. Best in town. They'll have visions of these in their heads well into 2006. Delivery is available, but it's much less pricey to stop in.
· Eater Gift Guide, Part I [~E~]