1) Per his marching orders from Bullfrog & Baum, BrunBrun gets down on his knees and two-stars Cookshop:

It presents a balanced user-friendly menu that offers something for everyone (a meatless wood-oven pizza, a meatless pasta, halibut in a shower of olives and raisins, beef brisket in a swamp of grits and fried onions) without collapsing into incoherence. The food is amply portioned, fairly priced and completely sophisticated but not remotely fussy. 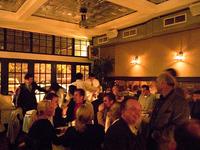 2) Soho newcomer HQ (right) gets two stars from The Hodg: "[Chef Terrence Cave's] food is up-to-the-minute—without being over-the-top. It’s sophisticated, but as accessible as bistro cooking should be." This echoes what we'd reported several weeks back, so the coast is clear, eaters. If you go, do congratulate Terrence on his new baby, who was born just days before the restaurant opened. [NYO]

For ingenuity, look no farther than the improbably compelling dried tofu with fresh hot peppers ($7.95), a warm pile of beige rehydrated dried tofu - like wide flat noodles - sauced simply with chicken stock, garlic, scallions and coarsely chopped hot green chilies. It was profound in its simplicity, like pasta with butter and Parmesan, and just as hard to stop eating.

But there were other dishes that demanded attention, like that jellyfish dish ($13.95). A mound of scallions, ginger and cilantro was piled in the middle of a lagoon of soy sauce in a large white plate. Ringing the lagoon were five milky white jellyfish that looked like miniature weeping willows or maybe unlighted fiber-optic sculptures. We rolled them in the soy, cut them into pieces and topped each with a bite of the salad from the middle of the plate. They had a cartilage-like crunch, not entirely unlike abalone, and a mild flavor. The dish won over everyone who made the leap of faith to try it.

Milky white jellyfish. Yum. Last one there is a rotten egg! [$25/U]

Elsewhere, Tables for Two at East Harlem's sublime Melba's; Hal Rubenstein assesses the validty of Lo Scalco's Michelin; and One Woman at Carmine Street's No. 28.