Upcoming restaurant openings still in the pre-pre-open stages. Spotted plywood in your neighborhood? Eater wants to hear about it. Drop us a line; bonus points for digital snapshots or cameraphone pictures.

1) Tribeca. What do we have here? Blogger A Test of Will snaps the above in-progress shot of a new lounge going in next door to Centrico on West Broadway at Franklin. Who's got the name... and our +1?

2) Flatiron. More turnover in the land of Barca 18. Writes a reader, "It appears Chango on Park Ave South has recently closed to make way for Big Daddy's Diner. [Ed: confirmed.] I'm guessing it is still owned by the same people as the rest of the Park Ave South restaurants (City Crab, L'express) judging from the speed with which the window sign went up [Ed: confirmed; former Chango owners overseeing the makeover]. With Via Emilia's forthcoming closure to make way for the new Gwathmey Siegel condos across the street, and Barbounia opening just up the block very soon (they had throw pillow delivery last week already), this stretch at the heart of the methadone clinic district looks to be getting a bit of a makeover."

3) Flatiron: More from a hot dining row: "I work at 360 Park Ave So, and was wondering if you had heard anything about the restaurant that's going in on our ground floor. Rumor has it as a Brazilian steakhouse, but they've been building it for eons now with no clue as to when it will open. The signs in the windows say something about Rio de Janeiro coming to NY (thus the Brazilian thing)." Buzzed about for quite awhile, that's Porcao, which does indeed come to NYC from Brazil by way of Miami. The New York Sun reported a few weeks back that its opening was imminent, but the number goes to an Audix voicemail system. 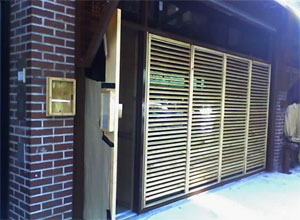 4) Lower East Side. On Orchard Street, between Stanton and Rivington, we recently noticed a rather spiffy new space going in a few doors down from Café Charbon. An Eater reader noticed it too, and sent along this cameraphone shot. We're totally intrigued, but don't yet have the name. Clues?

5) Central Village. An Eater reader writes: "The space where Lemongrass once was (University and 11th) will be occupied by Jacks Bistro & Bar. Looks like construction is just beginning. Between the Rugby store and this, looks like the frat boys are winning and the queens and artists will continue to flee east and west." More commentary at his NYC food blog technically.us/eat/.

6) East Village: "I see there is a new bar or restaurant going in on E. 13th St between Ave A & B. It's right next door to a terrific artist's studio - she does large-scale terratiums so you can't miss her storefront display - and down the street from the Prune chef's new place Uovo on Ave B. Any word on it?"

7) East Village: "There appears to be a new cafe going in on 3rd avenue between 7th Street and St. Marks. The likelihood that this cafe will be receiving a Michelin star is low, but I'm passing it along anyway." We're sort of loving its throwback branding... 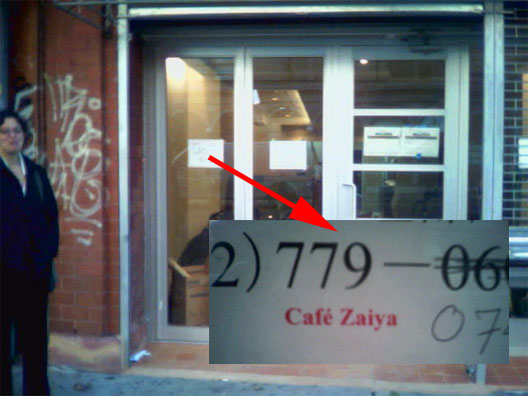