Share All sharing options for: Has LoSide Diner Served Its Last Hipster?

You want to open a diner on the Lower East Side? You want the hipster caché? You're taking a risk, son—a risk that just collapsed for the recently opened LoSide Diner on East Houston. A special Eater correspondent reports from the scene of a building destabilization that has rendered the premises uninhabitable for now at least:

The fire trucks were out in force today dealing with the collapse—or at least structural instability—of the building on the southeast corner of Houston and Eldridge. The main building had been under renovation for months (it used to house a combination pet-and-minibike shop), but the real casualties are its neighbors: A noodle factory that was perpetually enshrouded in pale white fog, and the LoSide Diner, which just opened a couple of months ago. The yellow tape is up, and the vacate orders declare that “the conditions in this premises are imminently perilous to life.”

Yet lest anyone mourn the LoSide, remember this: That place sucked.

So then, that would be "Buzz: Condemned." After the jump, a bonus photo of the interior that—despite the lemons beckoning from the counter—you may never set foot in again.

UPDATE: No, LoSide has NOT served its last hipster. The guy who has been hating on LoSide for weeks writes: "I just walked past at 2pm today, Weds, and poked my head in and asked if they really were open. The woman at the counter (behind the lemons) said, "Yeah, it's just a problem with the construction project two buildings over." Indeed, a call to the diner confirms it. We reached Amanda, who said, "Oh, yesterday was a fluke. We're open!" 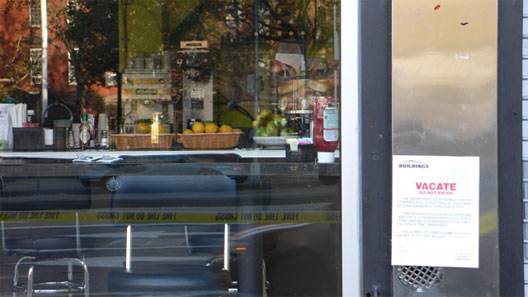