Running slightly behind schedule as a result of that damn red book, it's the Eater Dish for the week of October 31, 2005...

1) After New York pimped it a week early, newcomer 24 Prince finally opens its doors, earning a Thrillist salute. Everyone's on the lookout for the next secret place, causing places like this to be credited with too high a secret quotient. Because, hey, it's just a storefront in Nolita—a cozy laptop spot by day and hangout by night, with a downstairs VIP-room-to-be. (Think rich man's Lotus Club.) Opening party tonight; report to follow.

2) Aspen, the ski-lodge newcomer at West 22nd Street and Fifth Avenue, sounds like a trip. (New York notes, "Aspen goes for a seventies ski-lodge vibe with a fireplace, Lucite deer heads, and small-plate fare like black-Angus sliders, blue-corn dogs, and a chocolate dessert fondue.") But what does one expect at a place with a private dining room named for Hunter S. Thompson?

3) Final opening of note this week is Askew, a "global tapas" concern with interiors by Karim Rashid on La Guardia Place in the Central Village. If the location didn't already alert you, let's just say that having already stopped in, we'll not suggest you do the same. Nor will we subject you to the obvious pun on the eatery's name. Though we certainly could.

4) Is Mo Pitkins the Spotted Pig of the East Village? No fancy star yet, but hey, the game is young. And they've started serving brunch. After the jump, the full midday menu. 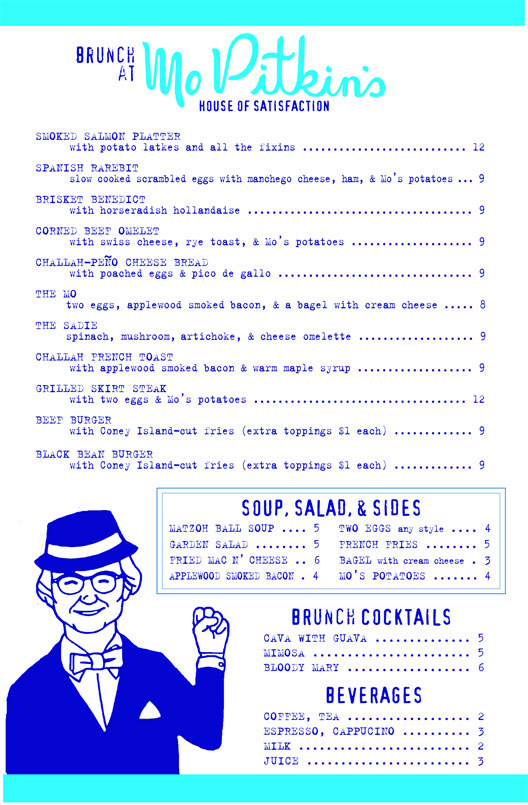