A weekly look at what's opening where. Back from the brink of near-oblivion and ready for some big late fall openings, it's the Eater Dish for the week of November 28, 2005...

1) Barbounia, the Greek restaurant in the old Patria space on Park Avenue South, opened for business last night. (Or so says the grumpy RESY woman we just spoke to.) That's notable because the place lost its chef two weeks ago—and an Eater correspondent noted construction still underway as recently as Saturday. New York describes the menu thusly: "A Greek-leaning menu of flatbreads and spreads, portobello moussaka, and feta-stuffed rabbit." We'll stop in tonight for a peek. 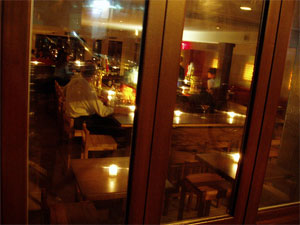 2) Another Monday opening: last night on Orchard Street, Matthew Kenney (ex-Pure Food and Wine) threw open the doors at his buzzed-about new vegetarian restaurant Heirloom in the cursed space that's been home to Cafe Lika, Mooza, and probably 10 or 12 other unsavory joints. We pushed our eyes (and our digital camera) up to the window at about 11pm for the shot shown here; the bar has been moved to the front of the semi-subterranean space, with circular booths running down one wall. Looks good. Assuming the rear garden has been kept intact, it's one of the nicest in NYC.

4) Juicy rumor of the week: much anticipated Upper Meatpacking newcomer Del Posto (which we've been tracking since its midsummer plywood stage) is said to be starting tastings this week ahead of its December 12 target opening.

5) Under the radar restaurant of the week comes from Williamsburg, where the owner of new restaurant Monkey Town emails us:

We've yet to be reviewed by any major publication, but we're serving some of the best food in NYC and certainly the best in Williamsburg. We opened October 1st. We're having our first Prix Fixe wine-tasting/dinner next Wednesday. half the restaurant is also a video cinema where you lie on beds and watch films and videos while eating. and for next Wednesday we're showing Mondovino admist the wine/food-tasting. We're indepedently owned, so we don't have a massive PR machine touting our special events. So, this is me, alerting you.

And us, passing the word along. More on Monkey Town at its website.