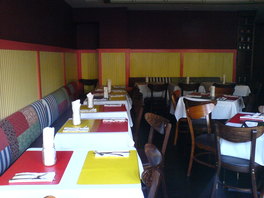 Maroons Smoke Shack at 228 Bleecker, the very short-lived collaboration of Gavin Citron and Arlene Weston has closed. Recall that Maroons had just opened in late September, replacing Citron, which itself lasted less than a year. We didn't fully believe it when, on our regular survey of the West Village, we noticed that the venue appeared to be shuttered (as seen above). But an inquiry with the venue's spokesperson confirms it: Arlene pulled out of the deal, taking her Maroons franchise with her.