Keeping you in the know on where to go (you can thank us for that one later), it's the Eater Dish for the relatively slow news week of October 3, 2005... 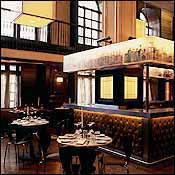 1) Few things satisfy more at Eater than a perfectly executed foie gras—well, that, and crossing another delayed restaurant opening off our list. So comes the good news that later this week, the doors will finally open at Country, Geoffrey Zakarian's long-delayed followup to Town. The chef, Doug Psaltis, is someone Eater readers should be familiar with—recall Snack's reveal on his dishy memoir a few weeks back? A 120-seat café opens first, followed by a formal dining room later this fall, notes New York. Country, by the way, is a hotel restaurant: the Carlton's, to be exact, on Lower Madison. But don't let that scare you. (Wednesday Update: DailyCandy dishes on the opening, and not to be outdone, the Times gave Mr. Psaltis big play, noting the controversy his memoir is causing in chef circles.)

2) If you've struggled to get a seat for dinner at Amy Sacco's Bette, take heed: the chic Chelsea hang is now open for lunch.

3) Because we love a burger joint as much as the rest of you—hey, heard Shake Shack is going to start serving breakfast? Oh yes. More to come on that shortly—we take interested note in Good Burger, a new Turtle Bay burger place that's loosely modeled on the Parker Meridian hotel's famed Burger Joint. New York reports that owner Nick Tsoulos even hired several flippers away from the Joint. Clever man.

4) Your weekly Cookshop update: not yet, friends. Buddha say: patience in all things.