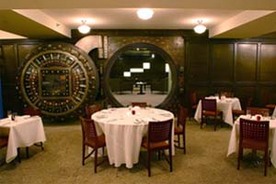 The space that was Vine has become a branch of Bobby Van's. The top level is considered "The Steakhouse"; downstairs, following a somewhat extensive renovation of the 1902 vault room (after photo above; before, as Vine, at right), houses "The Grill." Conditions you should expect in both areas, given the restaurant's ancestry and location: solid american food, high prices, and lots and lots of bankers.

The early buzz from Thrillist and Metro and on eGullet.